本日いただきました。とても胸が熱くなる内容です。
…被災した方々に心からお見舞い申し上げます。
Alfred und Beatrix Hoffmann/Bottmingen
==
Thank you for thinking of our country.
Your generous words is greatly appreciated. /h/

http://www.christianschwartz.com/haasgrotesk.shtml
2004-2010 Originally designed 1957-1961 by Max Meidinger with art direction by Eduard Hoffmann. Released as Neue Haas Grotesk by the Haas’sche Schriftgiesserei, and then revised and released as Helvetica by Linotype AG. Revival originally commissioned in 2004 by Mark Porter at The Guardian. Completed in 2010 for Richard Turley at Bloomberg Businessweek. Thinnest weight designed by Berton Hasebe. Unpublished.
Although my revival of Neue Haas Grotesk didn’t make the cut for the The Guardian redesign, primarily because it made the paper look too much like its last broadsheet design, I had planned for years to finish it off. I had a really hard time getting over the fact that sans serif italics (or more precisely corrected obliques) can be incredibly boring to draw, so I used every possible excuse not to finish them. The project finally came back to life when BusinessWeek was set to relaunch as Bloomberg Businessweek and Richard Turley was tapped to become the new creative director. Having worked with the face a bit as part of the Guardian redesign team, Richard was interested in giving it another chance, finally giving me no more excuse not to finish the italics.
Miedinger’s original Neue Haas Grotesk included a number of interesting alternates, including a cedilla that looked more like a flattened comma (preferred, apparently, by the French speakers among the Swiss Modernists), but the most striking was a straight-legged R, available in each of his handful of original weights by special order only. Impressed by the impact this one small change has on the overall look of the typeface, Richard asked me to make this the default form for Bloomberg Businessweek.
Although my main intent was to preserve Miedinger’s original without presuming that I could improve on it, I couldn’t resist adding a set of numbers at capital height for uses like British zip codes. The original lining numbers were drawn slightly smaller than the caps in order to look natural when mixed into upper and lowercase text, which looks slightly awkward when mixed directly with the caps.
Haas and Haas Grotesk are trademarks of Linotype and are used with permission. 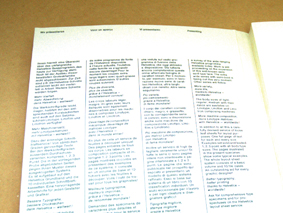 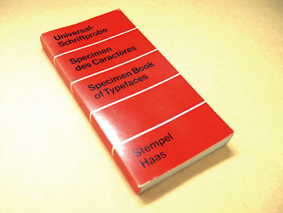 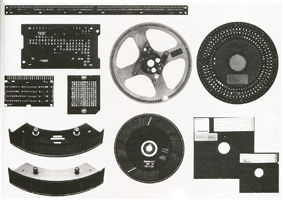